When an ISP purchases connectivity from another ISP, they do so generally with the expectation that they will receive access to all internet routes and will have their routes made available to the entire public internet. By doing so, they ensure that all users globally can access their content (and that they can do the same).

This requires the ISP who connectivity has been purchased from to directly or indirectly (though another ISP) have a connection to every other network. What happens if this connection doesn’t exist? 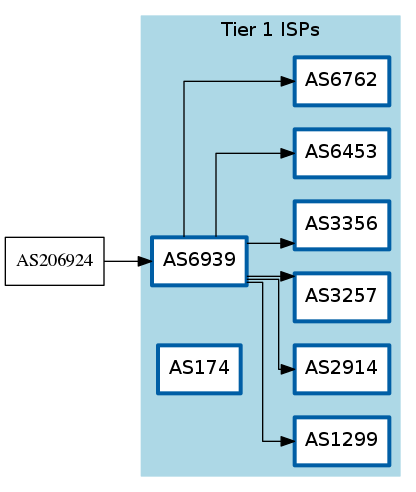 Network partitions are the source of significant headache for all parties involved. From an end user perspective, it can lead to aggravating and inexplicable issues; from the perspective of an ISP, it can drive up costs, especially within regions where network connectivity is considerably more expensive. From the perspective of the ISPs involved in the dispute, it can hurt public relations, especially when one party is acting in good faith to restore connectivity.

The case of Hurricane Electric and Cogent

While these disputes have happened several times in the past, they are usually limited to short periods of time and are resolved relatively quickly. Unfortunately, for IPv6, this has not been the case: two of the largest ISPs, Cogent and Hurricane Electric, do not – and have not, for several years – been able to reach each other on IPv6. If a user is solely behind a given network, they cannot access content on the other.

Due to the corporate nature of large ISPs, specific details regarding internal communications between the two parties are not known. Hurricane Electric has, in both public and in response to customer complaints, blamed the issue on Cogent, claiming Cogent is unwilling to interconnect with Hurricane Electric unless they pay a fee. As of the time of writing, Cogent has not responded publicly, though they have told customers that the issue is the result of Hurricane Electric’s decision to not pay for internet connectivity to reach them.

Being that both parties are large international backbone networks, the fact that the dispute has been ongoing for almost a decade is notably problematic. Historically speaking, the precedent is there for both parties to interconnect without charging each other (as both have done so with similarly sized networks in the past). Customers on both sides are paying for full internet connectivity.

The developers of bgp.tools would like to ask: can the ISPs involved just do their job?